Time for a Wedding Giveaway! I’m Giving Away 3 signed copies of my new book Weddings Away

This one is JUST for U.S. locations; sorry, no international sends right now, but we’re working on other giveaways coming up!

All you have to do is post a comment here, even a smiley-face, then say hi on Twitter @sharonnaylorwed. No tagging friends needed. We’re making this easy as pie! Deadline is 4/15/19.

Here’s the Amazon write-up for my book:

Now that you’ve said, “I do” to having a destination wedding, it’s time to make your fairy tale getaway celebration a reality!

Whether you’re planning an island wedding, overseas nuptials, or an intimate gathering in a beloved beach house or a charming village close to home, this invaluable guide from go-to wedding expert Sharon Naylor gives you all the information you need to make your magical day meaningful, memorable, and carefree—for you, and for your guests! You’ll discover:

* New ways to use social media accounts, blogs and apps for info-gathering and inspiration

*Great ideas for getaway bachelor or bachelorette parties, as well as arranging a romantic pre-wedding escape for you to reconnect with your beloved before the big day!

From navigating travel trends and social media to benefitting from little-known freebies, this comprehensive guide to planning your wedding from afar is brimming with information you won’t easily find anywhere else. Weddings Away has everything you need to keep your happily-ever-after stress-free and smooth sailing!

What a great start to this Monday! First, I received my first copies of my newest book, (which almost spent the night out in the rain after UPS left the box outside without ringing the bell! Whew!) And now, my article “Eat, Drink, Save” is featured in the January, February ’18 issue of Bridal Guide! Check it out, and find a whole pile of realistic, smart and budget-saving steps to get more from your wedding menu, cake and desserts and bar list! 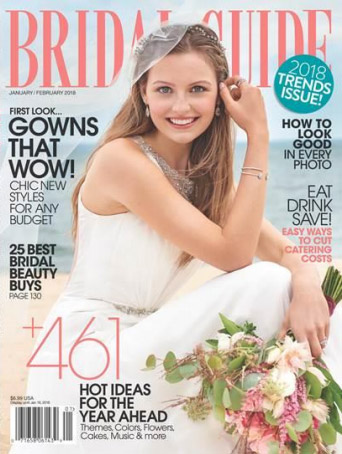 You might decide to stick with a particular brand, such as Alex and Ani, or go with a particular type of gemstone such as Aquamarine or Blue Topaz (in earrings, necklaces, and bracelets throughout the years!) Or, choose something highly customizable, such as jewelry bought during your honeymoon and lifetime travels. Dune Jewelry (above) lets you customize jewelry with actual sand from beaches all over the world [and if they don’t have your beloved beach in their sandbank, you can send in a small vial of sand you collected, to be incorporated into your chosen jewelry design. [I don’t work for Dune Jewelry — I own a bunch of their necklaces, personalized with our favorite beach sands!]

I’ve been meaning to post about our recent stay at the charming Star Inn in Cape May, part of the Cape Resorts family of hotels and fabulous eateries. We’d walked past this hotel a number of times in the past, while staying in nearby Wildwood Crest and driving into Cape May every single night. This time, we checked in to our Carriage House room and immediately saw its potential as a Girlfriend Getaway suite with its roominess and upscale design. Not to mention its awesome kitchen and fully-stocked supplies in case you want to cook a great dinner while you’re there. Two spacious, airy bedrooms and a pull-out couch mean you can comfortably fit several friends during your fun group stay. (Ask for the upper floor suite — that view is excellent!)

It didn’t even occur to us to cook anything, since we were right across the street from Congress Hall’s fantastic restaurants. Upon suggestion by our friend Laura, we tried the stuffed French Toast at the Blue Pig Tavern’s breakfast, and it was sensational. Marscapone in the morning? Absolutely. And Joe loved his omelette so much, we went  back every morning.

I spent a lot of time out on our suite’s deck overlooking the ocean, spending some time in the cozy chairs and on the swing, and although I didn’t get to order mimosas to enjoy al fresco, it’s on my list for the TWO trips we have planned this spring and summer to stay at The Star Inn again and again.

The beds were comfy, the shower spa-like, the night quiet.

Not that we were looking into our neighbor’s windows, but we did see a pretty mint color in a corner room, so we may try that room on a future visit!

Here are some photos of The Star Inn’s rooms: 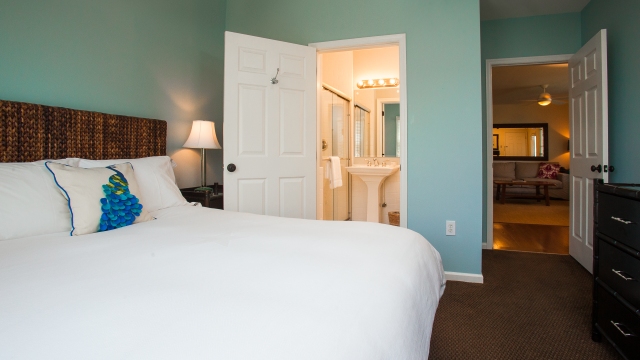 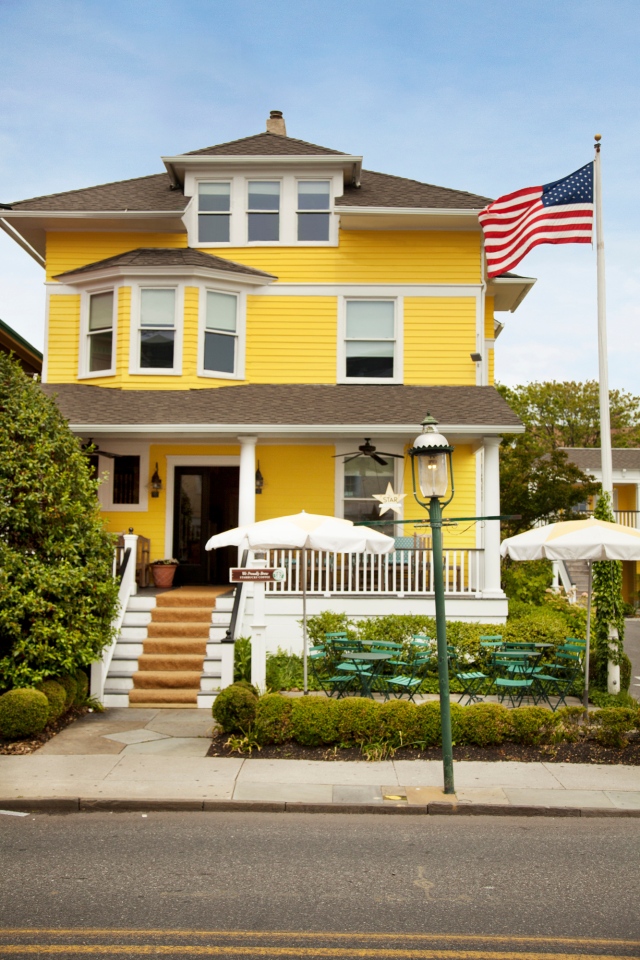 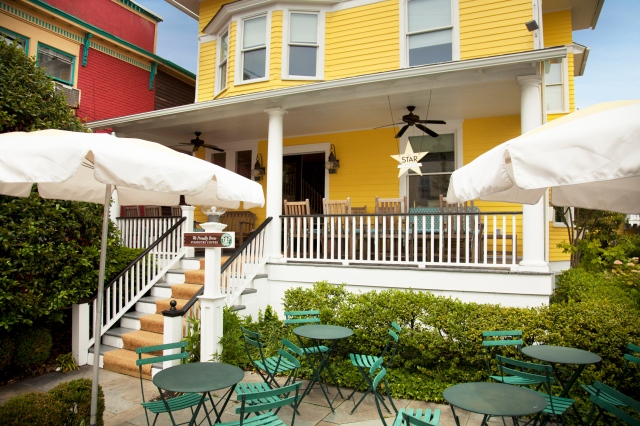 Oh, and they have excellent coffee and fresh-baked pastries in the lobby! And fantastic drinks in the Brown Room in Congress Hall. And a sweet gift shop. I could go on and on forever about how much I love The Star Inn. It’s the only place, besides our honeymoon resort, that we would (and will!) go back to again and again! 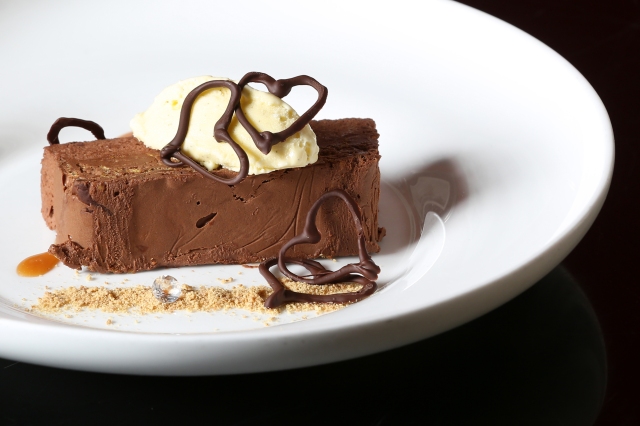 The Virginia Hotel is offering two unique Valentine’s Packages this year, featuring the historic Cape May Diamonds. Found along the pristine beaches of the Delaware Bay, the Cape May Diamond is a pure quartz crystal that appears as a frosted pebble when first discovered on the beach.  Once tumbled and cut, the stone resembles that of a real diamond. These shiny treasures are found in different shapes and sizes all along Cape May’s popular Sunset Beach. Throughout the year, visitors and locals alike scan the beaches for their very own one-of-a-kind diamond to keep as a reminder of their time spent in Cape May.

Cape May Diamonds have a history that predates the birth of the United States. In the 1750s, it is said that the last chief of the Kechemeche tribe, King Nummy, presented a large Cape May Diamond to Christopher Leaming, a local whaler. The Kechemeche believed that the “diamonds” contained supernatural powers, and used them to seal bonds of peace and friendship.  Today, similar bonds are created as families and couples scour the shores of Cape May Point looking for the famed rocks.

To honor the search for “the one” – that special someone and the perfect diamond, Cape May’s Virginia Hotel is bringing these local jewels to you and your sweetheart this Valentine’s Day with 3 special offerings. And for those who may not know, Cape May, NJ isn’t just a wonderful summer beach-town, it’s also a romantic winter getaway. With beautiful Victorian inns, a cozy beach-town feel, fresh salty air (even in the winter!), boutique shops, and delicious restaurants, Cape May is a special place to spend Valentine’s Day – especially at the luxe, critically-acclaimed Virginia Hotel and its fine dining restaurant, The Ebbitt Room. 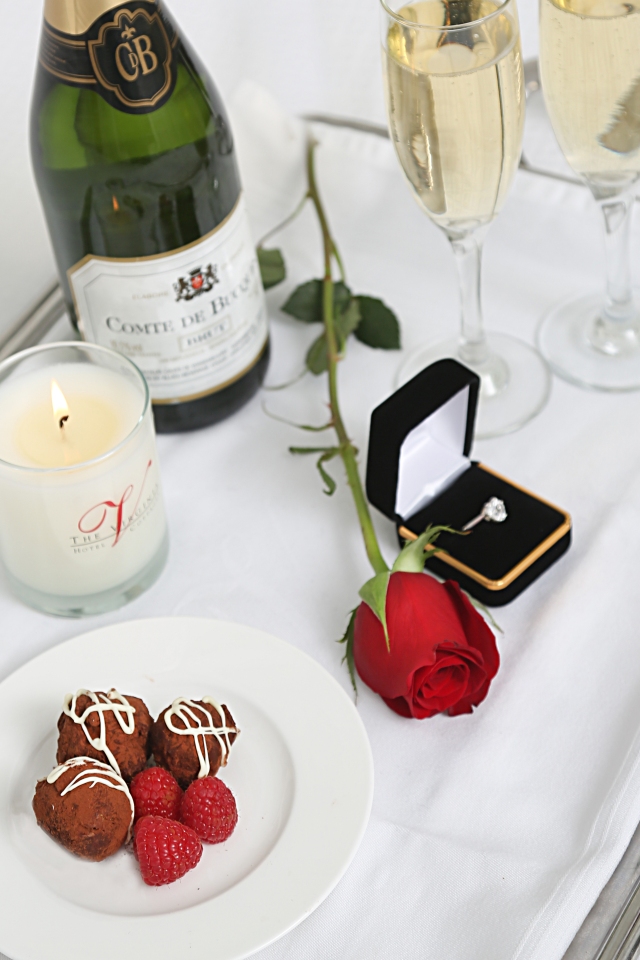 Your very own Cape May Diamond will be waiting for you when you book one of the following:

From Cape May With Love

Celebrate your next milestone or special occasion at The Virginia Hotel. Give a gift as unique as your love and as extraordinary as Cape May with a pair of beautiful Cape May Diamond Earrings. These precious gems are created from stones found right here in Cape May.

Diamonds and Dessert During the month of February, The Ebbitt Room will be featuring Diamonds and Dessert – a decadent dark chocolate mousse bar filled with milk chocolate and peanut butter praline made for two and topped with salted caramel sauce, Tahitian vanilla ice cream, and dark chocolate hearts. Each dessert is decorated with a one of a kind 2-carat Cape May diamond, polished and shined from the beaches of Cape May and set upon crushed graham crackers made to resemble the sandy search for the diamond.While the stones themselves have little monetary value, like real diamonds the memories and legends that are associated with Cape May Diamonds last forever in the sand of the city’s beaches.

About The Virginia Hotel

The Virginia, Cape May’s foremost luxury hotel, offers luxurious accommodations and personalized service in an immaculately restored 1879 landmark building, reopened by Curtis Bashaw of Cape Resorts Group in 1989.  Featuring 24 well-appointed guestrooms, intimate public spaces like the lobby bar and enclosed sun porches, and The Ebbitt Room – the hotel’s signature restaurant, The Virginia offers its adult-only guests a flawless integration of service and style with a timeless glamour.  The Ebbitt Room provides its discerning visitors with seasonal farm-to-table offerings from Beach Plum Farm, bringing the fresh food movement forward in Cape May. Acknowledged by Condé Nast Traveler in the 2012 Reader’s Choice Awards as a top hotel in the Northeast, in the 2013 Reader’s Choice Awards at #2 in their list of the Top 10 Hotels in the Mid-Atlantic, and again in the 2014 Reader’s Choice Awards as one of the Top 25 Hotels in the U.S., as well as as in the magazine’s prestigious 2013 and 2014 Gold List, the hotel is nestled on Jackson Street in the heart of the famed historic district of Cape May, New Jersey, and is a mere half block from the town’s beautiful beaches.

Readers are invited to learn more about The Virginia Hotel and Cape Resorts properties at www.caperesorts.com

Wow, I can’t even believe how delicious the new Cruzan Rum Premium Rum Horchata is! You have to have this as part of your engagement party, engagement party, bridal shower, wedding reception, or any other party you’re planning. It’s rich, smooth, creamy, and that cinnamon is divine. Check out the cocktails recipes here in the official release, and I’m thinking this would be a great welcome drink for a fall or winter wedding.

Cruzan Rum is made from tropical rainwater and high-­‐quality molasses and is distilled to be the cleanest-­‐tasting rum on the market. Crafted by Cruzan Master Distiller Gary Nelthropp, whose family has been making rum on the island of St. Croix for generations, Cruzan Velvet Cinn stands out among other horchatas.  In addition to containing Cruzan Rum, it combines the flavors of bakery cinnamon and rich dairy for a smooth and creamy combination reminiscent of cinnamon toast. Velvet Cinn also has a higher proof than others in the category.

“As rum horchatas gain in popularity and presence, Cruzan Rum saw the opportunity in the marketplace to develop a premium rum horchata option. Velvet Cinn makes an excellent addition to our exceptional portfolio and fills a need in the marketplace for a premium cream rum liqueur,” said Nabil Wanna, Senior Brand Manager of Rum at Beam Inc. “It fits right in with our expansion of flavors and provides rum horchata lovers with a high-­‐quality alternative.”

Horchata is a milky drink that originates from Mexico and is especially popular when mixed with rum. Cruzan Velvet Cinn takes the naturally sweet flavor a step further by adding a robust and lingering taste of cinnamon. Cruzan Velvet Cinn can be enjoyed on its own, mixed in a shot or in a cocktail. Jesse Card, Cruzan’s Master Mixologist, created the following recipes to introduce the new flavor:

Method: Combine all over ice, stir, pour into shot glass.

Named for the people of St. Croix (Crucians), Cruzan® Rum is synonymous with the spirit of the island whose unpretentious and authentic lifestyle proves that life – like our rum – is more enjoyable when you embrace the “Don’t Hurry” and sit back, relax and take things one sip at a time. The Nelthropp family, who has called St. Croix home for eight generations and runs the distillery to this day, crafts each of its rums with natural ingredients and a five-­‐column distillation process. Cruzan® also touts one of the cleanest-­‐tasting rums in the industry – a characteristic derived from crafting a spirit with low levels of fusel oils, a by-­‐product of the distillation process which, if not removed, can taint the smell and taste of the rum.

Check out my posts!